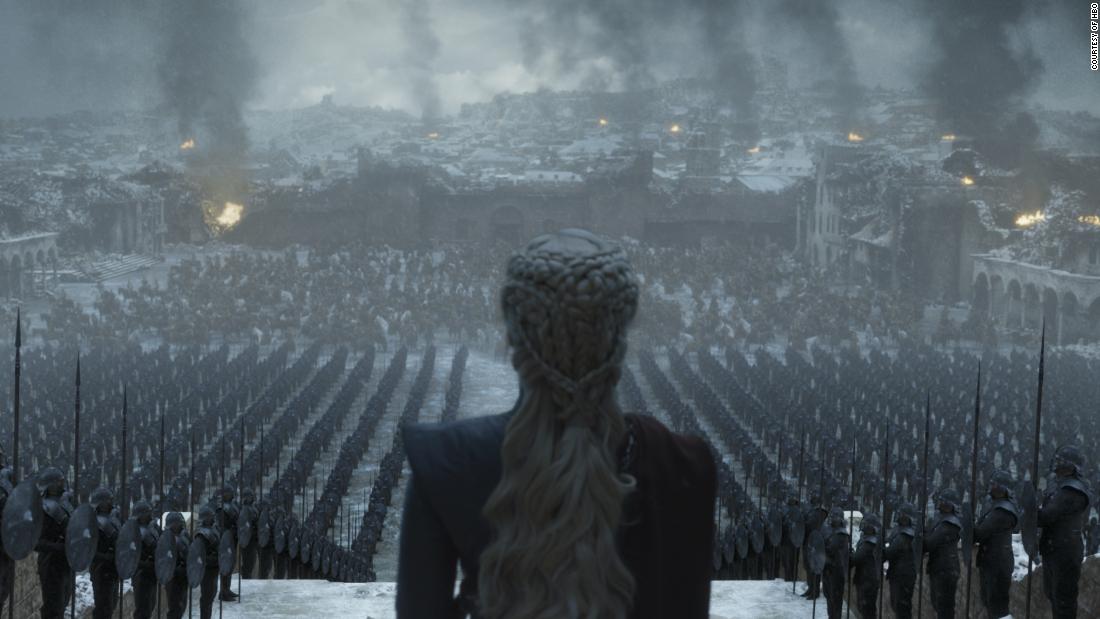 (CNN)Some say the world will end in fire. / Some say in ice.

After broiling the entire city of King’s Landing, Daenerys is in her element. She’s glowing, she’s thriving, she’s wearing sexy leather dictator clothes and giving troubling speeches in front of the burnt-out shell of the Red Keep. Gone is the wide-eyed innocent who stood timidly outside of Illyrio Mopatis’ house in Pentos all those years ago. This woman is a QUEEN.
In fact, it’s like she’s a completely different person! Suspiciously, abruptly, narrative-defyingly different! No wonder Jon, Tyrion and the rest of their crew are so freaked out by her.
Actually, Jon is not as freaked out as he should be. Tyrion, who is thrown in jail by Dany for freeing Jaime, tries to get it through Jon’s curly, mopey head: Dany is bad now! She roasted hundreds of thousands of people! “Fire and Blood” always did have kind of a fascist ring to it, but she’s really grinding it into the ground.
Jon has many strengths, but he’s never been the sharpest sword in the forge, and it takes an infuriatingly long time for him to break out of his “But she’s the queen” logic loop. By the time he finally picks up what Tyrion is putting down, they both look like they’ve grown another inch of scraggly beard hair. 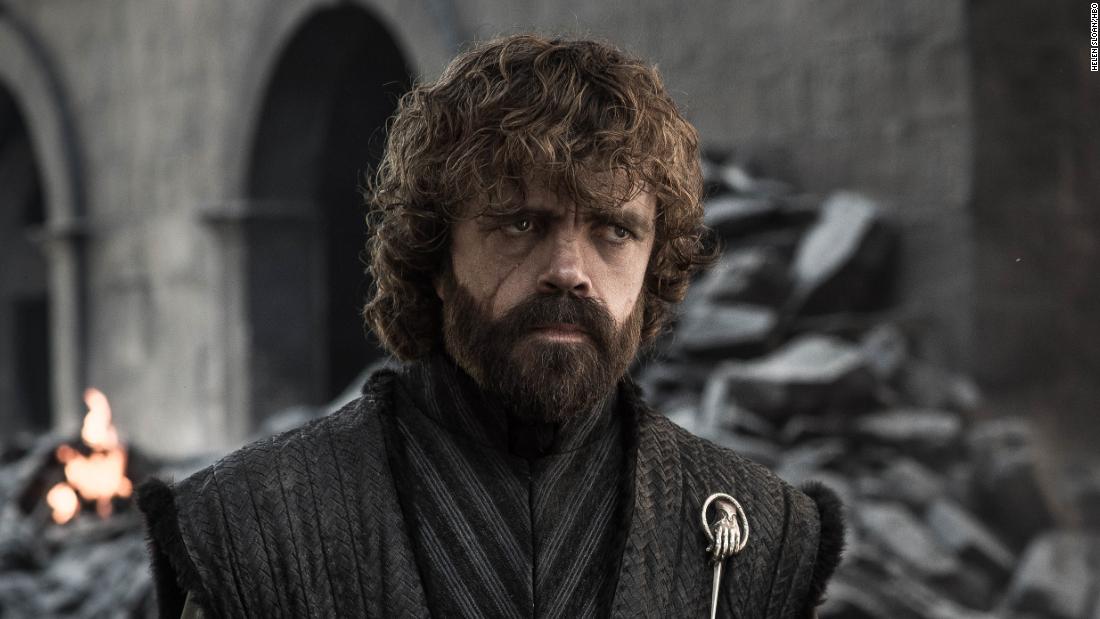 Meanwhile, Daenerys Stormborn of the House Targaryen, the First of Her Name, Queen of the Andals and the First Men, Protector of the Seven Kingdoms and all that jazz enters the throne room and fulfills eight seasons of prophecy, vision and mission by finally. touching. the. pointy. chair!
Not even the arrival of a very despondent Jon Snow can dim her moment in the blotted-out sun. (You know you’re a really sad dude when you suck the life out of a room that is literally crumbling and covered in ash.) Dany tries to convince him that actually genocide is good and the only perspective that matters on what’s good is hers and, hey, the people of King’s Landing were kind of jerks anyway.
For one queasy, moment, it appears as if everything will work out. They embrace. They kiss. Jon stabs her in the chest with a dagger and she dies.
YES, JON STABS HER IN THE CHEST WITH A DAGGER AND SHE DIES. 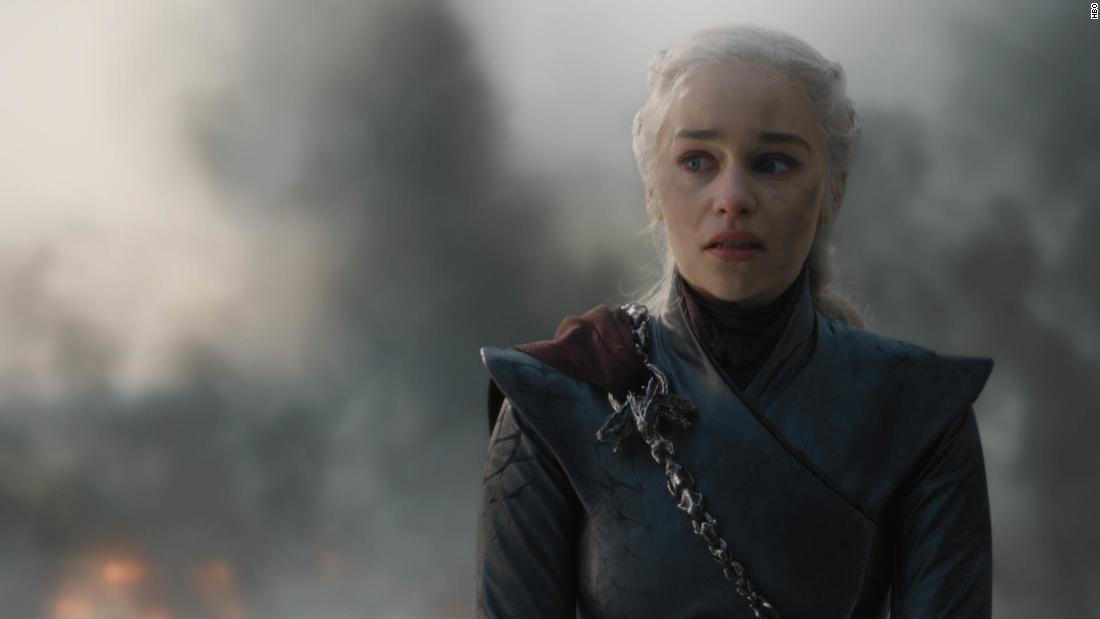 Daggers really are the MVP of major character kills, aren’t they? Daenerys and the Night King are going to have a lot to reflect upon in the afterlife: “I had dragons. You had scores of zombie dead people to do your bidding. And THIS is how we went out?”
If you thought you were upset at Dany’s oddly anticlimactic ending, you have nothing on Drogon, who goes nuts and immediately sets his mother’s killer alight. Just kidding! He completely wastes the Iron Throne. Did he realize, somewhere in his tiny dragon brain, that the ultimate reason for Daenerys’ downfall was her unwavering obsession with the Iron Throne and the power it represented, and thus the fault of her death lies not with Jon Snow, but with her own hubris and the object that fed it? Probably not, but it’s nice to imagine dragons having a sense of poetic justice.
Grief-stricken and thoroughly done with humanity, Drogon scoops up Daenerys’ dead body and flies off with her like she’s the baton in a relay race. That’s it. There’s no more dragon. There’s no more war. But there’s still 50 minutes worth of story left to tell. The “Game of Thrones” is dead. Welcome to the “Game of Sensible, Neatly Arranged Chairs.” 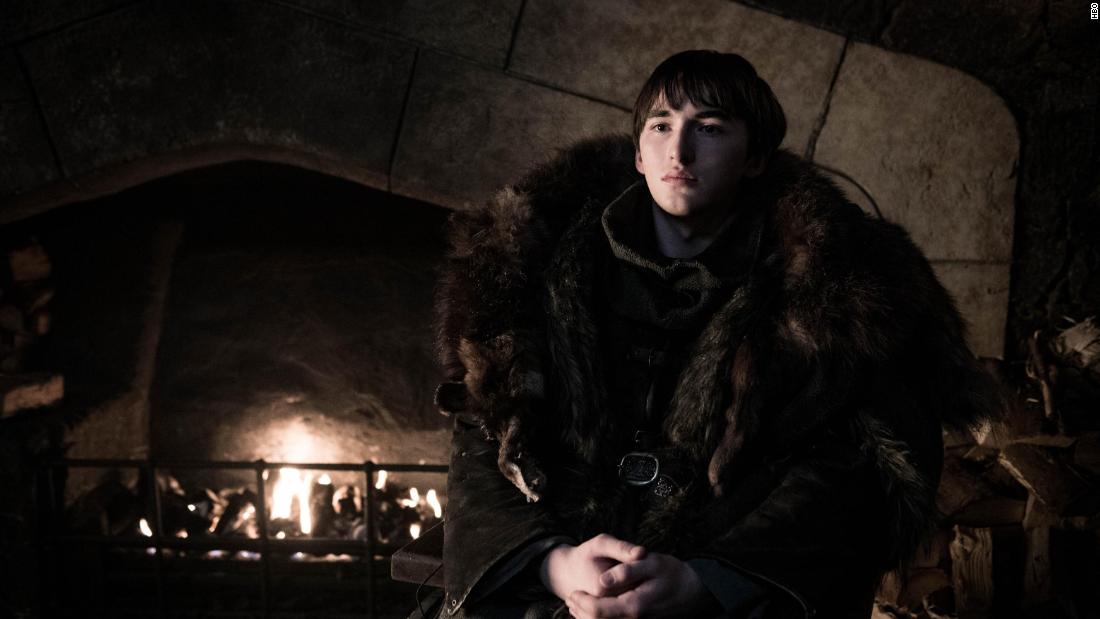 After Daenerys’ death, the Unsullied lock Jon up with Tyrion and everyone wanders around regent-less while the remaining heads of the great houses teleport to the Dragon Pit for a grand council. Look! It’s Robin Arryn, back from his journey to Pubertyos. And Edmure Tully! Huh. We thought that guy would be dead by now.
What follows is a scene with all of the tension and drama of a briskly-run board meeting. Everyone agrees Westeros needs a ruler, but how will they choose one? No, not via a democracy, SAM. How about a speech by Tyrion — technically still a prisoner, by the way — that convinces everyone that Bran is the most interesting and worthy candidate to rule the Seven Kingdoms?
Sansa, knowing her worth, opts out of the mess and reinstates the North as a separate kingdom with King Bran’s blessing. Six Kingdoms it is. Given Bran’s longstanding political apathy, it’s still six kingdoms more than he wanted to rule anyway. In that same spirit of reluctant obligation, Bran picks Tyrion to be his Hand of the King. You know, as punishment for um, all the other times he was Hand and was terrible at it.
Oh, what happens to Jon? He has to go back to the Night’s Watch, which is still around for some reason. Why? Because Grey Worm and Daenerys’ remaining forces demand justice for her death and honey, they’ve been to the North. In their eyes they’re basically sending him back to hell.
And so, the Starks go their separate, variably satisfying ways. Sansa becomes Queen in the North. Arya sets sail on the S.S. Spinoff to find what’s west of Westeros. Jon reunites with Tormund, returns to the land beyond the wall and finally PETS GHOST! Truly, the closure we needed. 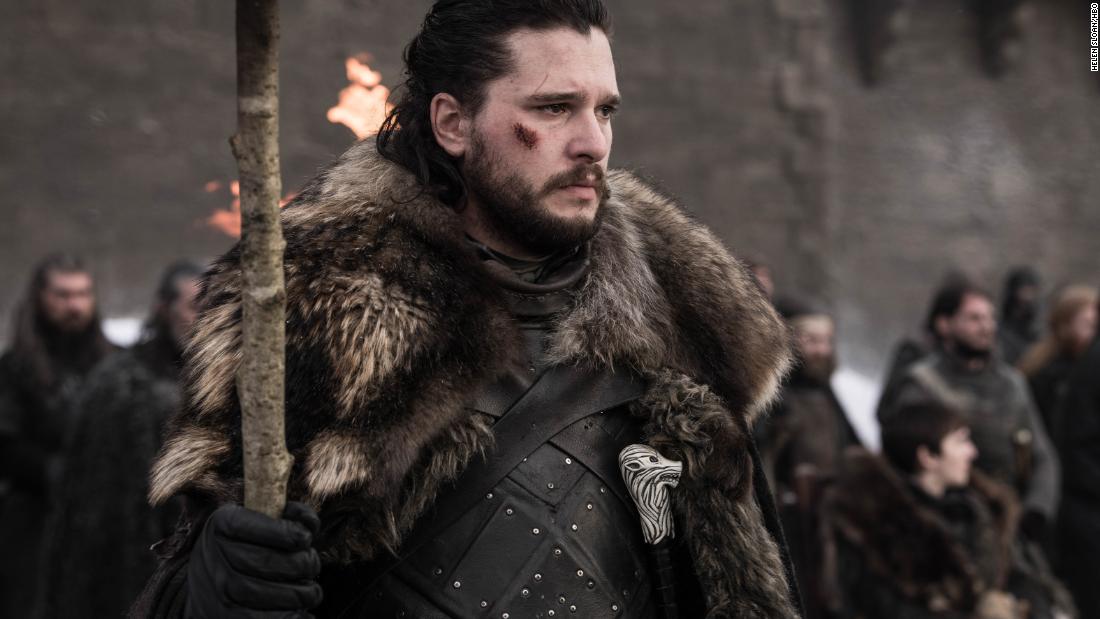 Meanwhile, as dawn rises on the reign of Bran the Broken, we are treated to a triumphant shot of Tyrion arranging chairs for 30 solid seconds. He’s very nervous for the first small council meeting of this new era, and you would be too if Bronn was your Master of Coin. Brienne’s there too, as Head of the Kingsguard, along with a freshly-knighted Ser Podrick.
Sam must have taken some online courses at Citadel.edu, because he checks into the meeting as the new Grand Maester. He presents Tyrion with a book about the War of the Five Kings called “A Song of Ice and Fire,” then looks directly into the camera and tap-dances out of frame. Get it? That’s the name of the books! Maybe the real thrones were the friends we made along the way!
As our group of heroes sets about the task of bringing the continent back from the edge of ruin and we leave the Starks, the Lannisters and the world of Westeros forever, the last singular spoken words of this legendary series will ring in our hearts forever:
“I once brought a jackass and a honeycomb into a brothel.”
Play us off, Ramin!

Grey Worm and the Unsullied were fresh off an impulsive murderous rampage and they didn’t immediately kill Jon after he murdered Daenerys? What, were they tired?
How did Tyrion find Jaime and Cersei in what should have been a whole catacombs’ worth of rubble? That’s just statistically improbable.
Is it still ashing? Or is it snowing, too?
RE: Dragon Pit meeting, who are all of those people?! Is that a dude from Dorne? Who’s that sitting by Davos? Don’t think we didn’t notice that, in the final minutes of the final episode of a sprawling, multi-arc epic fantasy series, the show managed to put together a scene with several characters we’ve literally never seen before.
Why are Bran and Tyrion holding their small council meeting in what looks like the remains of the Red Keep? That area is structurally unsound! The Master of Building Codes will not be happy.
There are innumerable other burning questions we have that will never be answered, like [deep breath]:
Why did it matter that Jon was a Targaryen if he ended up back where he started, with no name or hope for a lineage? Why was there so much pregnancy foreshadowing last season? Why is it so important that Jon and the Wildlings are returning to the land beyond the wall? Is Bran just going to keep a third eye on Drogon, live cam-style, for the rest of his life?
[gasp]
Why does Bran need a Master of Whispers if he knows everything? Why is Bran accepting recognition and titles related to his given name when he has repeatedly said he’s “not Bran anymore?” The crown was deeply in debt to the Bank of Braavos, when and how are they going to collect that debt? Is it still winter in Kings Landing? Why didn’t Dany get any last words? What happened to the Dothraki? What happened to the other Red Priestesses? What IS West of Westeros? Where is Hot Pie?!

“There’s nothing in the world more powerful than a good story.” — Tyrion Lannister
(We’ll ignore the fact the Tyrion was talking about Bran and not, say, Arya “Wore people’s faces, completed international tour of murderous vengeance and killed immortal ice being” Stark or Sansa “Escaped royal hostage situation, fed abusive husband to his own dogs and outsmarted Littlefinger” Stark or half a dozen other more interesting people at that meeting.)

– The Unsullied going to Naath to protect its people in Missandei’s memory
– Ser Pod!
– Drogon not dying, so there will still be an element of Targaryen magic in the skies.
– Jon petting Ghost
– Brienne getting some closure about Jaime in the Kingsguard Burn Book (where she will someday have her own page)
– Sansa’s bannermen shouting “Queen in the North!” because that’s what she deserves and when it comes to games and thrones, she’s the real winner. 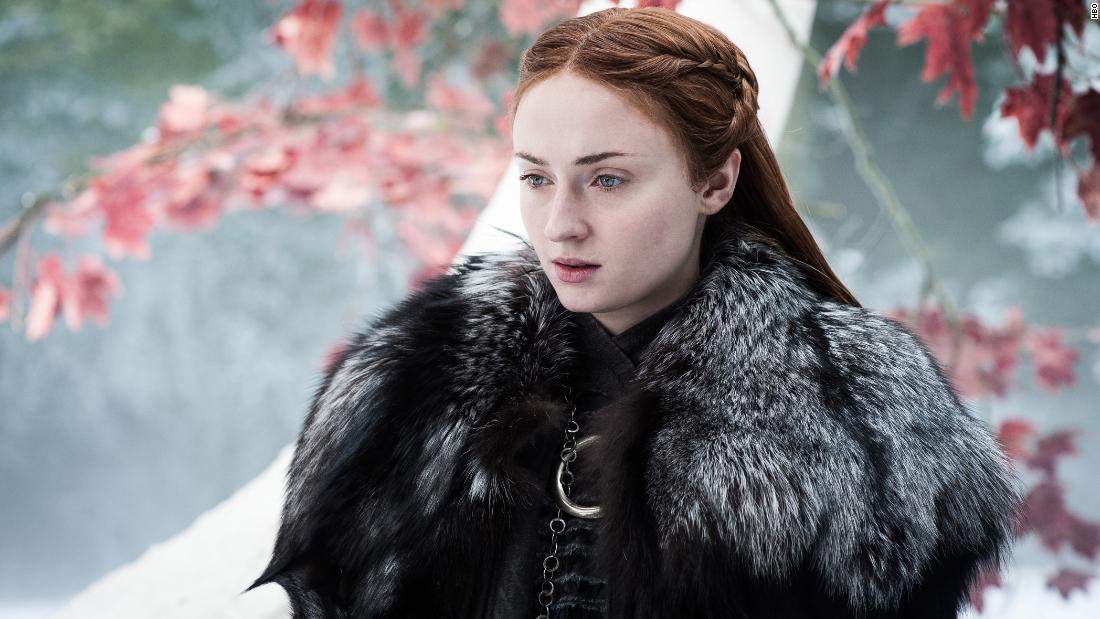 That shot of Daenerys coming out to greet her armies with Drogon’s wings spreading out behind her just spawned a million Instagram photo shoots.
Speaking of, there were a lot of Unsullied and Dothraki hanging around, despite catastrophic losses in Winterfell. Do they re-spawn? Or grow back their limbs, like starfish?
The final episode is titled “The Iron Throne,” but one of the possible titles was “A Time for Wolves.” That is a pretty fitting way to think of it, since the Starks now control or have a commanding presence in every space that’s important to Westeros: The crown, the kingdom in the North, the land beyond the wall and the sea beyond Westeros. That’s a dynasty, right there.
And yet…the lone wolf dies, but the pack survives. Perhaps they’ll always be a pack in spirit.

“Game of Thrones” is going to become like “Star Wars,” whether you like it or not
There are already several prequel series in the works. George R.R. Martin still has two more huge books to publish. There’s clearly a whole world to explore and millions of questions to answer. If you’re not ready to let go of this franchise, fear not: There will be plenty more opportunities to run it into the ground. What’s dead may never die.